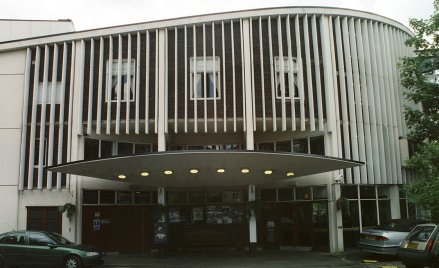 The Yvonne Arnaud Theatre is built on the site of an iron foundry set up in 1794 by E.Filmer.  The foundry was most prosperous between 1854 and 1883 when owned by Messrs Filmer and Mason.  Its products can be seen in many of Guildford’s buildings and iron crosses from the works mark graves in several Surrey churchyards.

The iron foundry was demolished in 1941, and the theatre was built later, being completed in 1965.  It is named after the French-born actress and musician (1890 – 1958), who died in Guildford after living here for many years.  Her memorial can be seen in St Martha’s church graveyard, at the top of St Martha’s hill.

The 1968 flood level is recorded to the right of the theatre door.