The White Lion Inn was one of the first of the town’s five large coaching inns.  It survived until 1956 when it was demolished to build Woolworth’s and later a shopping arcade aptly named White Lion Walk. 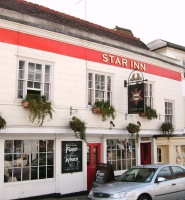 The Star is a much-altered medieval building known by its present name since at least the end of the 17th century.  Before the coming of the motorcar it was the headquarters of many local carriers who transported goods to the surrounding villages.

The jettied building on the opposite corner (Thomas Cook) was largely reconstructed in the early 20th century. 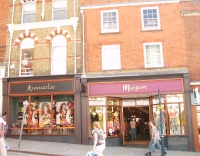 This building was built on the site of Guildford’s first House of Correction. 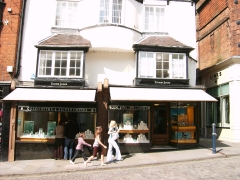 This is a 16th century building with a fine Victorian shop front.  The Old Swan Inn used to stand behind the shop, and Swan Lane was then its yard.

The façade of the upper storeys of an early 18th century town house can be seen above the shop. 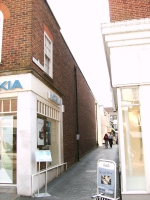 Butchers’ slaughterhouses were once found in this alleyway.  Cattle were driven in from the cattle market, which was held in the High Street until 1865.