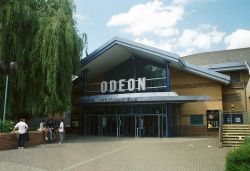 The Odeon Cinema, by the river Wey

The original Odeon Cinema in Guildford, at the top of high street, was built in 1935.  It was closed in the mid-1990s and was empty for some years, before being demolished to make way for a smart block of expensive flats.
The new Odeon was built here next to the river (where the old leisure centre used to be) in 1996.

Go down the brick steps (just before the footbridge) to get down to the riverbank, and turn right, taking you under the footbridge and towards the town centre.

From Tilford the Wey goes on via Godalming and Guildford to join the Thames at Weybridge.

In 1651 an Act of Parliament was passed authorising the River Wey to be made navigable from the Thames to Guildford.  The Wey Navigation was completed by 1653, when barge traffic started operating, making the river one of the first British rivers to be made navigable.

In 1760 an Act was passed authorising the construction of the Godalming Navigation, and work was completed by 1764.