The University of Surrey 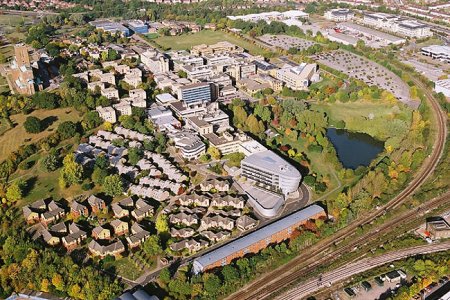 Aerial view of campus.
(From the old University of Surrey image bank).

The University of Surrey was established by Royal Charter in 1966, but its roots are older.  The Battersea Polytechnic Institute in London was founded in 1891 to provide further and higher education for London’s poorer inhabitants.  In 1957 it was renamed Battersea College of Technology.

The college outgrew its London base and the decision was made to relocate to Guildford.  Building began on the hillside below the cathedral in 1966 and there has been building work on the site ever since!  (Although I think 2004 may be the first year when no major new building has been built on campus.  The focus has moved to Manor Farm).  The first students moved in two years later and the new University of Surrey was firmly established in Guildford by 1970.