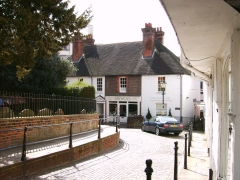 Before the construction of Millbrook (1960’s), Mill Lane was the only road link between the centre of Guildford and the town’s mills. 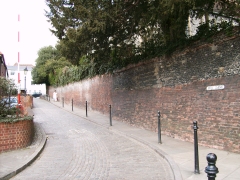 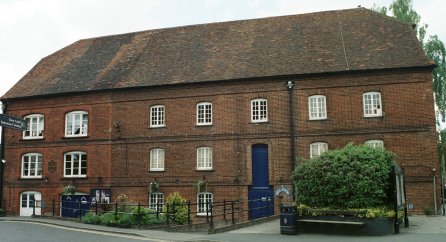 Flour mills stood on this site from the early middle ages until 1894.  There was also a fulling mill here when Guildford was an important wool town.  In 1701 a water-powered pump was installed by the mills to provide the town with piped water.  The present building was erected in 1771 and the western extension added in the 1850s in an identical style.  After 1627, the mills were owned by the Poyle Charity Estate and the profits used for the poor of Guildford.

The plaque dated 1896 records when the Corporation installed pumps and used the building as a water works. 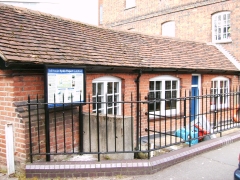 From 1794 the town council charged a toll of one penny on every load carried on the Wey Navigation.  Within a year, the “Guildford Penny” had raised £214
– enough to pay for paving the town’s streets – and indicates the volume of traffic using the Navigation.