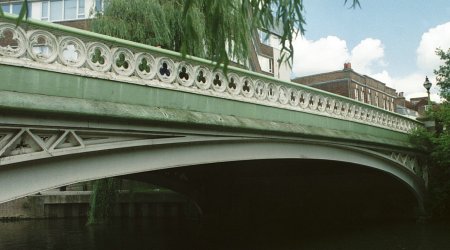 The town bridge is on the site of the “Golden Ford”, and it is this Ford to which Guildford owes its name.

Anglo-Saxons came to England, probably as mercenary soldiers to assist the Romano-British.  Their first settlements in Surrey were in the north-east (now the south of Greater London).

Since AD 43 the Roman way of life had been increasingly adopted in Britain, and a number of villas had been built in Surrey, including one in Broad Street Common (a few miles North West).  Roman artefacts have also been found in places such as the Merrow downs, (a few miles North East).

But there is no evidence of a Roman town in Guildford itself, which surprises archaeologists and historians, as the “Wey gap” makes Guildford a key location as a pass through the downs, and the ford itself was by then an established crossing place.  An ancient track-way which ran along the North Downs descended to this river crossing.

The Romans withdrew from Britain in the early 400s, and many more Anglo-Saxons flooded in, settling further and further west.  This westward expansion was halted in about AD 500 when Arthur defeated the Anglo-Saxons at Mount Badon, and so the Saxons had to make do with the infertile soils of West Surrey.

So it would have been sometime in the early 500s AD that the Anglo-Saxons formed a small community here; a few wooden huts around the crossing which they called Gyldeforda – “the Golden Ford”.

The colour gold is thought to be either because of the yellow flowers that grew here, or (perhaps more likely) because of the golden colour of the sand of the river bed.

Between 1760 and 1764 (when the Godalming Navigation was built) the central span of the old (medieval) bridge was widened and the ford dredged to allow the passage of barges to Godalming.  If you look at the sand around Millmead or walk along the river to the hill of St. Catherine’s priory you will see the type of sand which may have been in the golden ford.  When in the water, this sand truly can look golden.

The first written record about Guildford dates from around AD 885 – a reference that King Alfred the Great left his royal residence here to his nephew, Aethelwald, in his will, although the site of the residence can not be located.

The river floods fairly often, the latest being Christmas (December 24-25) 2013,

which saw much of the area around Millmead, St Nicolas Church and the Odeon cinema underwater.  The worst recorded flood in Guildford town Centre was in 1968; the level the water reached then is recorded on St Nicolas Church and the Yvonne Arnaud theatre, and there are photos of that flood available online!
(My thanks go to Roberto for sending me this link to Alan Edwards’ photos, causing me to discover that his old link no longer worked).

The medieval bridge was destroyed on the 15th February 1900 by a flood which swept timber from Moon’s Timber Yard (which stood where Debenhams is now) against its piers.  It was replaced by an iron bridge, which was dismantled again in 1983 when it was found to be unsafe.  It was reconstructed two years later using original stonework and cast iron components. 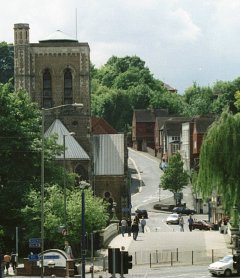 A church has stood on this site since at least 1300.
The present church was completed in 1876, and is built of bargate stone quarried in the Godalming area (south of Guildford).

Plaques on the north side of the church record the 16 September 1968 flood level; the latest of the most serious floods to affect this low-lying church. 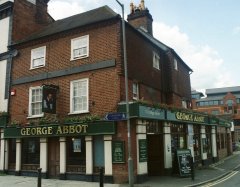 The building on the other side of the road from St Nicolas Church was built as an inn in the early 19th century when (what is now) the old Portsmouth Road was realigned.  Before then the route to Godalming and beyond was along Bury Street (next to St Nicolas church).  This inn was renamed at the end of the 20th century to the “George Abbot” pub, after the famous Guildfordian George Abbot.