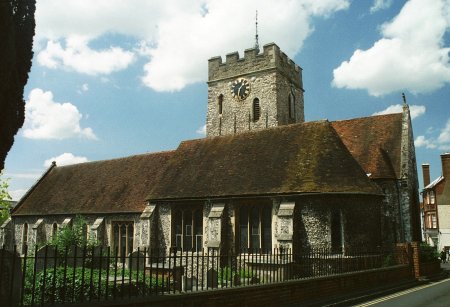 During the 7th century missionary priests converted the locals to Christianity, and a wooden church was built on this site.  By the 9th century, the centre of town was what is now bordered by Friary Street, North Street, Castle Street and St Mary’s Church.

In about 1050, the wooden church of St Mary’s was rebuilt in stone, and so this is the oldest building in Guildford; or at least part of it is.  The Saxon tower of St Mary’s Church is the only surviving part of Saxon Guildford.  Saxon lesenes (strapwork) can be seen.  The parapet is medieval.

Most of the present church was built by the end of the 13th century – around the time Henry III was spending much time at the castle.

In 1825 the chancel, which projected into Quarry Street, was shortened.  It is said that King George IV’s carriage got stuck en-route to Brighton, and he ordered the road to be widened!

The church was restored in 1863 and the railings and clock were added shortly afterwards.