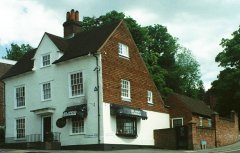 These buildings are 17th century brick cottages with tile-hung ends.  For many years they housed the manager and office of Guildford’s first water works.  The first reservoir was built in 1701 when William Yarnold obtained a lease to supply the town with water.  This was pumped to the reservoir in wooden (hollowed-out elm) pipes running from a water engine built alongside the town mills.  A second boat-shaped reservoir was built above the first in 1853 and functioned until 1973.  This, and the brick wall surrounding it, remain.  Guildford Corporation purchased the works in 1866 when a new reservoir was built at the top of Pewley Hill, but a full 24-hour supply was not achieved until 1881. 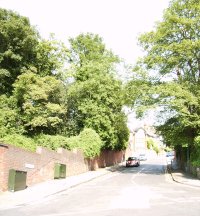 Pewley Hill derives its name from the de-la-Puille family who acquired the land in the area from Richard Testard in 1255.  His family had been granted the land by William the Conqueror.  The Poyle Charity was established in 1627 when Henry Smith, a wealthy Cheapside business man, founded charities in all Surrey parishes.  He settled the recently purchased Manor of Poyle, as it had become known, in trust for the benefit of the poor of Guildford.  In the late 19th and early 20th centuries much of the land was sold for housing development, but the charity still exists. 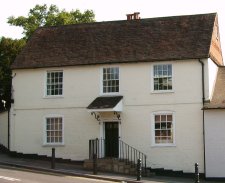 No 6 (Pewley Cottage) is a 17th century cottage with steps to street level.  Nos 2 and 4, now a restaurant, were built over a century later, on what was then the southern outskirts of the town.  In the 18th century Sydenham Road was called the “Upper Backside”, and before that was known as the South Town Ditch.  The ditch marked the limit of the early planned town.