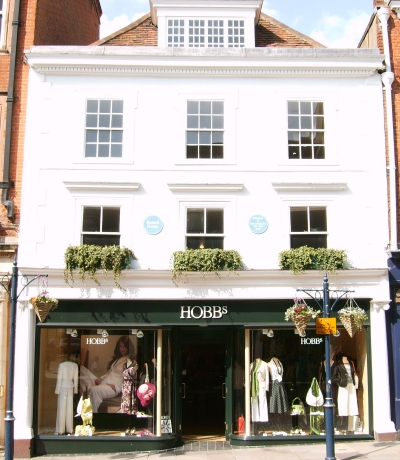 In the 18th century the Russell family worked here as artists and booksellers at the “Sign of the Bible” and produced an early history of Guildford.  The birthplace of the portraitist John Russell R.A. (1745-1806) is commemorated by a blue plaque at first floor level.  His father, also called John, was a stationer at the “Sign of the Bible”, and was mayor of Guildford four times.


Russell was based in London, and spent several months of each year travelling the country and doing portraits in oil and pastels.  He perfected his technique in pastels to a very high pitch, and in 1772 published ‘Elements of Painting with Crayons’.  He won premiums from the Society of Arts for Drawings in 1759 and 1760 and entered the RA Schools in 1770.  Russell exhibited at the Society of Artists in 1768 and at the Royal Academy between 1769-1806 (abundantly), becoming a full Academician in 1788.

Anne Russell (1781-1857) and Maria Russell (1782-1861) were two of the artist’s twelve children, four of whom died in infancy.  Anne married Mr Jowett, whose uncle Dr Hey of Leeds was a great friend of the artist.  Hey helped treat Russell for deafness that troubled him in 1803.

By 1804 Russell was fifty-nine but still at the height of his powers.  Williamson (op.cit. pp.90-91) records that in 1800, Russell was charging £100 for a portraits of 40 x 30 in / 101.5 x 76 cm, which was as much as Reynolds charged in the last years of his life.  However the years of hard work were beginning to take a physical toll on the artist.  He had been troubled by ill health for much of his life and in 1803, he suffered a bout of cholera which left him almost deaf. He spent less and less time in London and more time in Yorkshire and particularly Leeds where his friend Hey lived.  He continued to exhibit to acclaim at the Royal Academy but in April 1806, while in Hull, he was taken ill with typhus fever and, in his weakened state, died shortly afterwards.