Robert Beckingham was a wealthy London grocer who died in 1509.  In his will he left lands in Bromley, Kent, and in Newington, Surrey, to his wife Elizabeth.  On her death the parishioners of St Olave’s church, Southwark, were to use the income from his property to fund a chantry priest.  If they failed to obtain a license for this within two years, the income from the land was to be used to “make a free school at the town of Guildford” or be used in some other charitable way.  Elizabeth Beckingham died in the following year and the lands were given to the trustees, including the Mayor of Guildford, in 1512 and used to “keep and maintain a free school in the said town of Guildford”.

“The first evidence of the location of the school is cited by George Austen as a deed of 3 September 1520 granting to the Mayor and approved men of Guildford a plot of land adjacent to the schoolhouse in the parish of St Mary’s, Guildford, to provide additional income to the school.” 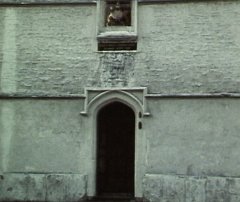 The 1547 Chantries Act meant that all land used as chantries was to be reclaimed by the King.  The school was in financial difficulty.  However, after the mayor and citizens petitioned King Edward VI, in 1552 he granted income to the school which would from then be named:
“The Free Grammar School of King Edward the sixth for the Education, Institution and Instruction of Boys and Youths in Grammar at all future times for ever to endure”,

or simply, “The Royal Grammar School”.  The present site at the top of the High Street was purchased in 1555 and the school was built on that site between 1557 and 1586.

One of the school’s old boys, John Parkhurst (who became Bishop of Norwich), left all of his latin books to the school in 1575.  It contains mainly 16th Century religious books and is one of few remaining chained libraries in the country.  The oldest book is a copy of Diomedes’
“De arte grammatica” printed in Venice in about 1480.  It also has a copy of Sir Walter Raleigh’s “History of the World”.

It is believed that boys at this school invented the game of cricket!  An entry in the Guildford court book of 1598 is thought to be the first mention of the game in the English language.  In a local court case of a land-owner’s dispute, an old boy named John Derek gave evidence to say that he and his fellow scholars “did run and play cricket on the plot of land” in about 1550.  Instead of stumps they used a three legged stool, like one used for milking, which was called a “cricket”.
(There has recently been a rather unsubstantiated claim that the game originated in, what is now, Belgium.  See the BBC News article of 2nd March 2009.  The person claiming this also makes big claims that the game of golf also originated there!  In the opinion of the author of this page, the evidence that we have from Guildford about the origins of cricket is still the most compelling).

The construction of the new building of the RGS (on the opposite side of the road from the old building) began in 1958 and was completed in 1963.

An old Borough Boundary Stone (21) can be seen half buried in front of the new buildings, marked with a G and dating from 1761 or 1762.

Until a series of 19th-20th century enlargements, the Borough of Guildford consisted of little more than the High Street and adjacent roads and lanes, and a small area around St Nicolas’ church and Millmead on the other side of the river.