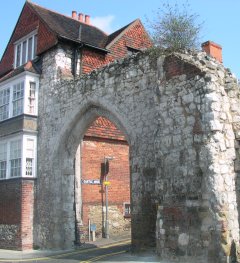 The archway, which formed an entrance to the castle, was probably built in 1256 under the supervision of John of Gloucester, Master Mason to Henry III.

Note the grooves for the portcullis.

Please note that as of 15 February 2009, access through Castle Arch has been stopped until further notice.  Refer to the BBC News Report. 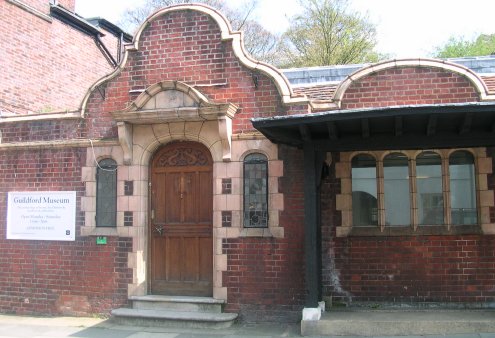 The Museum is probably the house that was built by the Carter family soon after they became owners of the castle.

The museum is open Monday to Saturday, 11am to 5pm (but check the museum webpage for any changes to this). 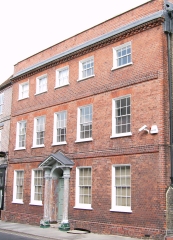 Built in about 1760 for a Dr Robert Mitchell who owned, and probably modernised, number 50. 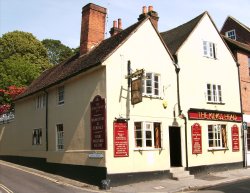 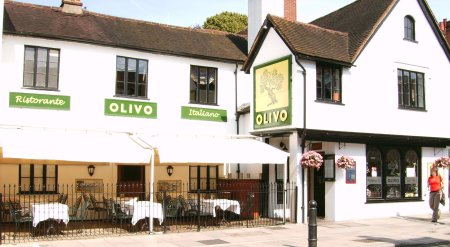 A heavily restored timber-framed building.  It has been an alehouse, a butcher’s, a baker’s, the Guildford Dispensery, a furniture warehouse, and a succession of other shops.

Painted decoration dating from about 1600 is visible on the exposed beams.  The partially destroyed gothic text is difficult to decipher but the reader is told to “eschew lewd wyckedness … nor speake that is filthy”.  A large Elizabethan wall painting with the moral inscriptions was uncovered in No 13 Quarry Street.

Flanked by two timber-framed buildings which were refronted in the 18th century, one with pargetting to imitate masonry.  A clay pipe kiln, one of several to have been found in the area, was discovered behind no.5.  It contained a large number of plain pipes dating from about 1700 and examples can be seen in Guildford Museum.

The alley was once used as a sewer which emptied into the river below.