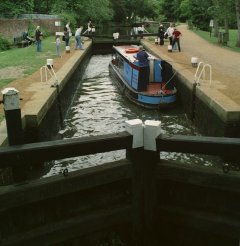 The Wey Navigation survived the coming of the railways, but commercial traffic declined considerably after the First World War and had ceased completely by 1950.  The last working barge left the Wey Navigation in 1969.

The canal was then owned by William Stevens, whose family had worked or owned it since 1830.  Both canals are now kept by the National Trust, and are used as recreational waterways;  Narrow boats can often be seen going up and down, as in the photo on the right.

The river is a nice place to come in the summer – perhaps for studying, but also for picnicking, walking or general socialising.  You can walk to Godalming along the tow path – or just go as far as the ruins of St. Catherine’s Priory (an early 14th century chapel).

You can also go on a boat.  There are several boat houses and rowing clubs, including the rowing club on the on other side of the field from Millmead (by the footbridge) which is built on the site of a wharf from which chalk and lime were exported, and coal imported for lime burning.  The large disused chalk quarries are visible from the river bank beside the road (A281).

On the way back towards the Town bridge, note the bronze of “Alice’s Adventures in Wonderland” by the sculptor Edwin Russell.