Beneath 72-74 High Street is a perfectly preserved late 13th century vaulted semi-basement shop (one of the finest in Surrey) cut into the underlying chalk.

Number 90 is an interesting house with a 17th century façade and parts of an earlier building incorporated into its structure.  Note the vase-shaped pilasters supporting the bay windows. 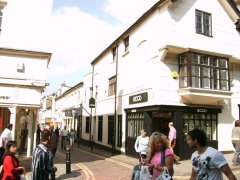 The Red Lion, the largest of Guildford’s coaching inns, stood here.  Amongst its guests were King Charles II and Samuel Pepys.  It declined into a pub in Victorian Times (cf. the coming of the railways!), its gate renamed “Market Street”, and then closed after the First World War.

The former houses date from the 16th century.  In number 125 part of the roof timbers have been exposed and can be seen from the first floor.