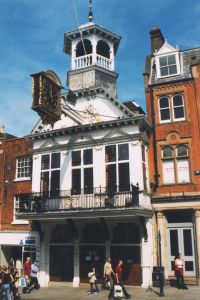 The façade with projecting clock – symbol of Guildford – was built in 1683 onto the front of an Elizabethan hall, which was extensively restored in 1987.

The Guildhall is open to the public on Tuesday and Thursday afternoons.