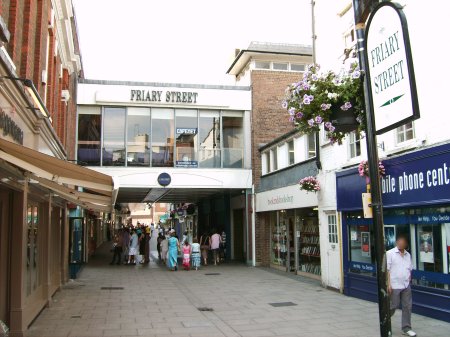 Friary Street was once a busy thoroughfare running alongside wharves, warehouses and a militia barracks.  It is now a pedestrianised area with shops on either side, and leads to the Friary Shopping Centre.

The Friary shopping centre is so-called because it is built on the site of a Dominican Friary, which was founded in about AD 1275 by Eleanor of Provence, widow of Henry III, probably in memory of her grandson who died in Guildford.  The friary was never a rich one and was dissolved in 1538, when only seven Blackfriars were in residence.

In the early 17th Century, the Earl of Annandale bought the ruined Friary from the Crown and built a fine house on the site, which survived until at least 1818.

The Dominican Friary was excavated from 1974-78 and the finds can be seen at Guildford Museum.

The Friary Shopping Centre now has all sorts of shops and cafes.  Some are mentioned on the shopping page.