As you walk along the river into tow 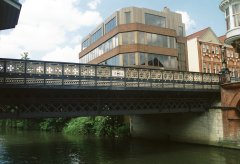 n, you will go under two road bridges.  The first (pictured on the right) is called “New Bridge.”

As it says on the side, it was built in 1882 making it structurally the oldest of the three bridges in the centre of Guildford, but at the time it was built it was much newer than the town bridge which we will see later.

“New Bridge” originally carried two-way traffic, but as car use increased (and congestion with it)
“Friary Bridge” was built in the 1960s, and the one-way system we have today was developed.

Between these two bridges on the opposite side of the river you will see what is now the “Electric Theatre”. 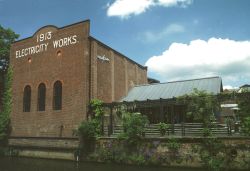 The 1913 Electricity Works was built on the site of the Militia Barracks.  It was superseded in 1927 by the electricity generating station in Woodbridge Road.  The shell of the building remained a town centre curiosity for almost 70 years.  The new piazza was once one of the town’s two bus stations.  (There remains only the bus station on the other side of the Friary centre). 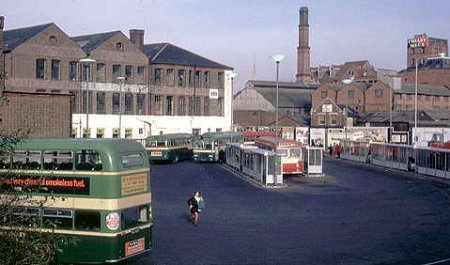 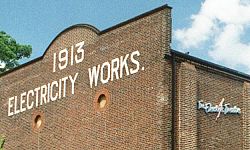 Several years’ campaigning by local arts groups looking for a permanent home culminated in the conversion of the building into a state-of-the-art studio theatre:  The Electric Theatre opened in January 1997 and is owned, funded and managed by Guildford Borough Council.  It is a small community arts venue hosting a mix of events ranging from international cinema, dance and music as well as comedy and amateur theatre.

The buildings just before the Electric Theatre are known as “The Rodboro Buildings.”  (The back of this building can be seen on the left of the photo of the bus station above).

In 1901 Dennis Bros. Ltd moved into these buildings, which were designed for the production of their motor vehicles.  Dennis vehicles, especially fire engines, were exported around the world, including to the fire services of Singapore, Athens, Brisbane, Barbados, Cairo, Penang and Shanghai.