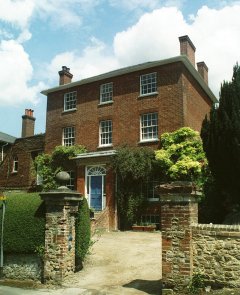 In 1868 it was leased to the Reverend Charles Lutwidge Dodgson, otherwise known as Lewis Caroll, which he rented for his 6 unmarried sisters to live in.

Lewis Caroll, best known as author of Alice’s Adventures in Wonderland and Alice Through the Looking-Glass, was a Mathematics Lecturer at Oxford (1855-81) but visited Guildford frequently and spent his later life living here with his sisters;  The arrival of the railways meant he could live here but easily travel to Oxford.  He died in the house on the 14th January 1898 and was buried in The Mount Cemetery.

The memorial plaque was put up to celebrate the centenary of his birth.

Please note that as of 15 February 2009, access through Castle Arch (the road named Castle Hill) has been stopped until further notice.
Refer to the BBC News Report.
The options to reach Quarry Street are either through Racks Close (when it is open) or back through the main castle grounds and down Castle Street.