A brass plaque records that when the premises were extended in 1899, the original façade was preserved; the mouldings in the shape of buttons is a reminder of the origins of the building.

Wanting to keep his money and valuables safe, Mr Haydon built for himself a small secure room.  As other shop keepers heard about it, he soon found that he was making more money than from his drapery business, by keeping other people’s money safe and charging them for the privelege!

The replica “Sign of the Crown” hanging outside at first floor level is a reminder that the building was the Crown Inn and family hotel, one of Guildford’s five large coaching inns until the 1850s.

One of the surviving medieval “gates” leading to the southern town ditch. 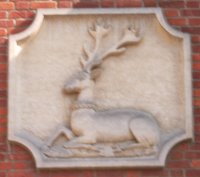 The White Hart Inn, the grandest of Guildford’s five large coaching inns, was knocked down in 1905 to build Sainsbury’s.  There is a commemorative plaque in stone above the shop front and commemorative text graven into a stone by the entrance.  The inn sign is preserved in Guildford Museum.

(Now Art Gallery, Shop and Tea Room)
Built in 1660 for John Childe, a lawyer who was three times mayor of Guildford, Guildford House is a (fascinating) 17th century town house at the top of Guildford High Street – opposite Sainsbury’s.  It is a complex building, probably incorporating parts of an older house.  It contains a magnificent carved staircase, moulded plaster ceilings and original window fastenings.  Guildford Corporation bought the house in 1957 and it is now Guildford Borough Council’s art gallery showing selections from the Borough’s Collection and varied temporary exhibitions.

The Gallery Gift Shop is well known for its selection of greetings cards and high quality original craftwork, including scarves, glass, ceramics and jewellery.

The Tourist Information Centre is also here:
For information on tours, bus times, what’s going on in and around Guildford, plus other places (e.g. London).

The Gallery Café provides an ideal stop for those shopping in Guildford, serving a full range of delicious home prepared hot and cold food, cream teas, coffee, cakes and slices.

Opened in 1961, the library is in North Street (through Jeffrey’s Passage from the High Street).
Borrow books, etc, of non-academic nature.