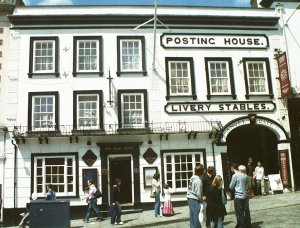 The Angel Hotel is the sole survivor of Guildford’s five large coaching inns. Established in the Middle Ages, there is Tudor or Jacobean timber-framing behind the Regency façade, and a much restored medieval undercroft.

All roads converge on the Guildford gap to pass through the Downs and so much of the traffic from London to the central south coast passed through the town.  Travellers needed rest and by the 17th century Guildford had earned a good reputation for its inns – the Angel, the White Lion, the Red Lion, the White Hart and the Crown.

The inns flourished as road-travel increased, particularly when Portsmouth developed as a major naval base from Restoration times.  Portsmouth was a two day journey from London, and Guildford was a convenient place to stay the night.  The early 1800s saw a boom in the coaching trade.  28 services passed through Guildford, with an average of 10 coaches a day travelling in each direction, with perhaps 200 passengers.

However this all came to an end in the 1840s as the railways proved a quicker, cheaper and more comfortable way to travel.  The last coach ran through Guildford in 1849, the year the railway reached Portsmouth from London.

Famous guests of the Angel include Lord Nelson, Charles Dickens, Lord Byron and Jane Austen.  In 1876 the young Prince Imperial of France stayed here (later killed in the Zulu wars).